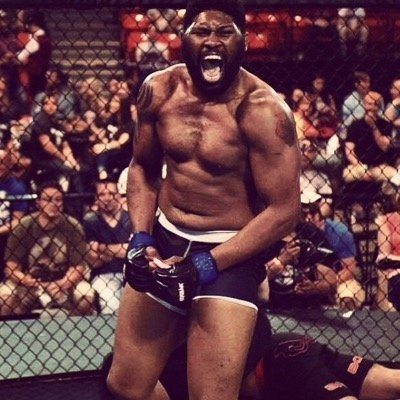 UFC fans were hoping to get an exciting, promising heavyweight contender. Curtis “Dull” Blaydes is a wrestler but couldn’t get a single takedown with more than 14 attempts. He looked good at the weigh-in’s, dropping like 15 pounds of fat and looking fitter than he ever has, but Dull Blades should just go back to his twinkies and fighting chumps.

He should fight with his cellphone and call his opponents whenever he plans on a takedown since those pathetic takedown attempts were so telegraphed he looked like Frankenstein creeping in slow-motion from the opposite end of the Octagon.

“Dull” Curtis Blaydes may have a future in the UFC but he needs to get some real coaches and some real training. Otherwise, he’ll just be another talent wasted.

Curtis “Dull” Blaydes scored a pathetic 72 significant strikes with ZERO takedowns and won by decision. He was the biggest favorite on the card at -800 but under-performed much like the pathetic James Krause fight last night.

This is the most important thing that young fighters need to understand – winning is secondary. It’s how you win.

For God’s sake, if you choose fighting as your profession, then go hard or do something else.

NO ONE was impressed with Dull Blaydes in his UFC 213 fight, and I would think if he had any fans coming into this fight, he lost them all.

But listen, it’s not that difficult to bounce back – what you have to do is adopt the attitude of Justin Gaethje. Fuckin go hard, man. All fighters have it in them, otherwise they wouldn’t be fighting in the UFC. Don’t forget that part of you that helped you get there.

Bet on the UFC at Intertops! Redeem this Intertop bonus code for a new customer bonus! Find other great betting offers at BettingSitesUSA