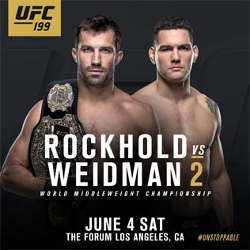 If you’re a fan of the UFC, you’ve got to try playing fantasy MMA at DraftKings, it’s a lot of fun and makes all the fights – and how they finish – very exciting.

Below is my lineup for the upcoming UFC 199 in Los Angeles, featuring Luke Rockhold vs Michael Bisping for the Middleweight Championship as well as Dominick Cruz vs Urijah Faber for the Bantamweight Championship.

When putting together this lineup, I consult the current sportsbook odds at https://bettingsitesusa.net/ufc-betting-odds-lines/

You can play fantasy UFC at DraftKings.

Putting together this lineup, I had to start with Hector Lombard. Lombard is a beast with 19 TKO’s and 7 submission victories. Overall, he has 35 wins and 5 losses. Although getting up in age at 37, he’s still much younger than his opponent Dan Henderson at age 45. Dan has lost 6 of his last 8 matches, 3 of which he was knocked out in the 1st round. I’m looking for a 1st KO in this match and taking the 100+ points with Lombard.

Next I chose Luke Rockhold, who is the biggest favorite on the card at -800 and also has a good chance at a first round finish. Rockhold is just better than Bisping in all facets of the fight. Even if Rockhold does not get the first round finish because Bisping is running the entire time, Rockhold has 5 rounds to tack on points. Rockhold is a safe play, but he’s also very expensive, so now we have to find some value picks.

Of the value picks, I like Sean Strickland who is a well rounded fighter. I’m actually a little surprised he’s this cheap at $9,100 – he boasts a 17-1 record, going 4-1 in the UFC. His opponent, Tom Breese, is an up and coming Brit who is undefeated, but has not fought the caliber of fighters as Strickland and has fought in the UFC 3 times.

Another value pick is Dong Hyun Kim at $9,300. Be warned that this is not the Dong Hyun Kim who’s also known as the Korean Zombie – this is a different Dong Hyun Kim! Current odds at the sportsbook has this fight at even odds, yet Kim is priced at a discount.

That leaves enough for Andrade – who is a +130 underdog, which is not bad at all, and should go the distance and possibly squeak out a win.

So there’s my UFC 199 lineup, good luck with yours and enjoy the fights!

Click here to visit DraftKings and draft your UFC lineup!