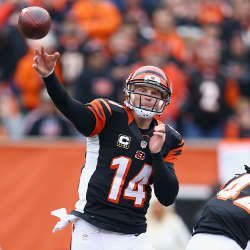 Sorry for missing last week, consider it our bye week as we were on vacation and didn’t play, but we’re caught up on everything and ready to share some great value picks!

Check out one of our lineups below!

Ok, so there’s a huge divisional rivalry game coming up between the undefeated Cincinnati Bengals and Pittsburgh Steelers. Dalton has been a strong fantasy QB this season averaging 25 fantasy points per game, and in Week 8 his price is only $6,000 making him a very cheap option.

While the Pittsburgh defense hasn’t been horrible against QB’s, we think this game could very well be a high scoring shootout between these rivals as the Over/Under is projected around 48 with the Steelers being a 1 point favorite. A close, high scoring game would be great for our odds on Dalton here.

With the return of Big Ben, we hope that’s the case so we also have Antonio Brown in our lineup. He’s been suffering without Ben but we think this will be his mid-season coming out party.

Todd Gurley, as well all know, is legit and facing a weak San Francisco defense at home. The Niners give up the 7th most fantasy points to the running back position so Gurley should be an excellent value at only $6,300.

Doug Martin is a volume play who will likely get a ton of touches and maybe a few receptions. He’s the workhorse for the Bucs so at $5,500, we love that pick.

Tavon Austin is very cheap at only $4,600. And though we see Gurley being the focus of the offense, the Rams will still need to throw the ball and Austin will be the likely receiver. San Francisco gives up the 3rd most fantasy points to wide receivers.

Nate Washington looks like a great play against Tennessee with Cecil Shorts injured. With all the attention on DeAndre Hopkins, look to Washington to get his fair share of targets and with a price of only $3,600, he’s a sweet deal.

We love Devonta Freeman. He’s not cheap, but look for Freeman to run all over the Buccaneers. Freeman had a relatively quiet week in Week 7, but we anticipate the Falcons having total control of this game and relying on Freeman to do it. Freeman is basically match-up proof, so we’re going to ride him here.

Finally, the St. Louis Rams defense could score big points against the struggling 49ers and they only cost $3,200.

Good luck everyone, hope some of these picks help you out!

Don’t have an account to DraftKings? Register your new account with our DraftKings promo code from TV described here!

Read a comprehensive review of playing fantasy football at DraftKings at https://fantasyfootballers.org/draftkings-review/