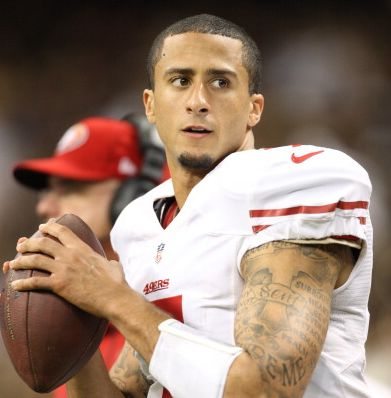 This week I’m playing a few contrarian picks and entering this particular lineup into a few GPP tournaments. Check out one of my Week 6 DraftKings fantasy football lineups below:

You can clearly guess the contrarian pick – it’s of course Colin Kaepernick. There is some reason to this madness. First off, Kaepernick is the cheapest QB at the minimum price at $5k. In Week 5, Kaep scored 20.78 points, ranking him 12th among QB’s. Last week his price was actually higher at $5,200 against NYG in New York. He threw for 262 yards, 2 TD’s and no interceptions.

It’s interesting to see his salary decrease after last week’s performance. In my opinion, this is because there’s a week delay on adjusting prices, and most big price changes take 2-3 weeks. So there are definite bargains to be had the week after a big performance or major change of some kind.

This week, Kaep faces the secondary of Baltimore at home. Baltimore ranks 2nd in giving up fantasy points to quarterbacks AND wide receivers. That’s why I’m stacking Kaep with Anquan Boldin – his favorite target (by far).

If you watched the SF game last week, it looked like Kaep finally found his groove. I’m thinking he builds on that in Week 6. Here’s another consideration – for many tournaments and just about all 50/50’s, if you score 200 points, you’re making some money.

So, if your players can produce 4 times their price in fantasy points (since you start with $50k and looking to earn 200), you’re in great shape. At $5k, can Kaep earn 20 fantasy points? He did last week against a better defense in an away game, so yes, I think it’s very possible this week.

Because we’re saving so much money by going with Kaep and Boldin, we go big on the running back positions. I’m going with Forte, Foster, and Freeman – all with great matchups.

Last week we saw Hankerson emerge with a lot of targets and great production. It appears he has taken over Roddy White’s spot and if Julio Jones is still hurting, he could see a ton of targets.

Next, I have DeAndre Hopkins against Jacksonville. It’s possible that Houston just runs all over Jacksonville with Arian Foster as Doug Martin did last week (39.8 fantasy points!) – but I’m guessing that we’ll see a mix of runs and throws with Hopkins and Foster dominating the touches. You can score against Jax in the air or on the ground as Tampa Bay showed.

I have Bennett as my Tight End, but there are reports that he injured himself in Thursday’s practice. He is likely to come out of the lineup and be replaced by Antonio Gates, who is $100 cheaper and crushed Pittsburgh on Monday with 30+ fantasy points.

For defense, I have a value pick of the Minnesota Vikings facing the Kansas City Chiefs with an injured Jamaal Charles.

There ya go, good luck to you all in Week 6! Click here to visit DraftKings and draft your football team!